I went to the poles early today thinking that I could vote and get out,  NOT.  The machines were not working.  I didn’t know this so, I signed in and once you do that you can’t leave.  They finally got one machine that was working, kind of, and the line began to move.  If I had taken my purse instead of just my wallet I would have had a camera to take a photo to show you the scene.  Didn’t happen.  I will show you another scene instead.  Remember that I told you I was putting new carpet in my bedroom?  I painted the walls and this morning we hung a mural on one wall.  I really love it because it is gloomy outside right now but, look at what I can see every morning when I wake up. 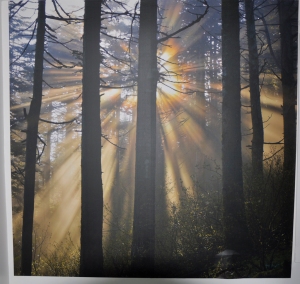 If it looks crooked it’s not, my walls are not straight.  This is an old house and, just like me, every year it sags a little more.  I will take another photo after the new carpet is in.  The man who is putting it down was behind me in the voting line so, I don’t know what time he will get here.

I imagine there will be a larger turnout to vote this election than in some past.  I hope you vote and while you are in line talk to those around you, not about politics but, about life.  Remember:  The sun does not shine for a few trees and flowers, but for the whole wide world’s joy. – Henry Ward Beecher.  Melanie

My thoughts for the moment

One response to “Voting day.”

This site uses Akismet to reduce spam. Learn how your comment data is processed.